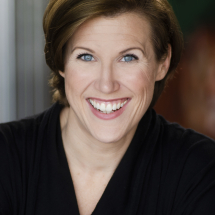 Education:
Liz has a Master of Music in Opera and Music Theatre from Arizona State University, 2011 Liz also has a Bachelor of Music in Vocal Performance from University of Northern Colorado, 2005

Liz Brooks is a professional voice teacher, singer and actress. She earned a Master of Music degree from Arizona State University in Opera Theatre, a Bachelor of Music in Vocal Performance from the University of Northern Colorado and studied musical theatre at the American Musical and Dramatic Academy in New York City.

Liz's love for music started early and has broadened over the years into various styles and genres. Her wide vocal range has allowed her to perform both dramatic and comedic repertoire in opera, musical theatre, children's theatre and straight plays. She has performed in various venues throughout the country and was part of the main stage cast for Disney Cruise Line in Europe and the Caribbean.

In opera she has had the opportunity to perform both mezzo-soprano and soprano roles. Some roles include Maria (The Bartered Bride), Miss Pinkerton (The Old Maid and the Thief), Tisbe (La Cenerentola), and Mrs. Nolan (The Medium). At ASU Liz was chosen as a cover study for the role of Nedda (I Pagliacci), and Marguerite (Faust) with Arizona Opera. In Denver, Liz has performed for Opera Colorado chorus, Bravo! Vail, Denver Immersive Opera (DIO) and is a member of the Yuletide Carolers. In musical theatre Liz has had the opportunity to play multiple roles ranging from Morticia (The Addams Family), Anna (The King and I) and Dolly Levi (Hello Dolly!) to name a few.

Liz believes that music and singing is a personal and passionate art form and so teaching voice should include the mind, body, and spirit. While creating a strong, solid vocal technique she encourages her students to work hard and have fun. She believes that every student can succeed if they are willing to try.

Liz has a Master of Music in Opera and Music Theatre from Arizona State University, 2011

Liz also has a Bachelor of Music in Vocal Performance from University of Northern Colorado, 2005