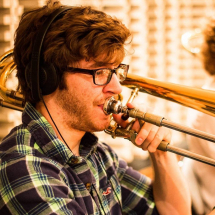 Ed Eby is quickly becoming known as one of the best up-and-coming musicians in the Denver area. As a trombonist, he has played with some of Denver’s best ensembles including the Adam Bartczak Big Band, Denver Jazz Orchestra, Lakewood Symphony and the Colorado Honor band. While attaining a bachelor’s degree in jazz studies from the University of North Texas, he performed with some of the best collegiate ensembles in the world including the 2 O’clock Lab Band, concert band, trombone choir, trombone quartet and Greenhorn jazz ensemble. He also had the honor of being recorded on the “Channel Two” album by the University of North Texas 2 O’clock Lab Band. In 2012, he received an honorable mention for “Best Jazz Trombone Ensemble” from the International Trombone Association. For five years, he was awarded the UNT 1 O’clock Band Scholarship from the University of North Texas. Ed also began studying piano while at the University of North Texas and has played piano and guitar with different church groups and rock/pop bands for services and charity events.

As a composer, he has created works for many different groups across a multitude of genres including jazz, funk, rock, blues, latin and classical. These works have been rehearsed, performed, and/or recorded by the 2 O’Clock Lad Band, Colorado Honor Band and the Greenhorn jazz ensemble. He has also composed other works for trombone quartet, brass choir, string ensembles and solo piano.

Ed has been an educator for the past ten years and has taught with several organizations including the Colorado Honor Band, Performance Play Music School, Alaska School of Music, the Lake Braddock Band and the Anchorage School District. With these organizations, Ed has taught a multitude of instruments including the trombone, trumpet, euphonium, tuba, guitar, piano and general music courses.