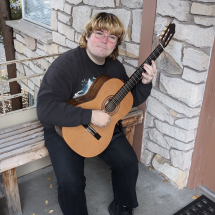 In an ever-growing love for music, Dylan Freeman has spent most of his life learning and playing a variety of styles and instruments. Starting with guitar, he learned to play a variety of genres from rock, to jazz, to classical, eventually winning the WMEA State Solo/Ensemble Competition in classical guitar. He went on to earn a degree in Classical Performance from Western Washington University. There he focused on learning all he could about music theory, performance techniques, and became a more advanced multi-instrumentalist. He had been playing piano for a number of years prior, but his degree put a special focus on piano as well as guitar. He then became much more knowledgeable about piano and now enjoys it as much as guitar.

Dylan has years of experience on Guitar, Piano, Bass Guitar, and Drums and has a love for classical music and is extremely comfortable with nylon string guitars, although has been playing electric guitar for just as long. In addition to studying music academically, he has been a part of rock and metal bands since the age of 14. He doesn't believe one style of music or playing is better than any other and continually puts effort into learning as many different styles as he can.

His teaching method isn't just about being technically proficient in an instrument, but it's about understanding how and why they work the way they do. This could be about how to play something precisely the right way, the music theory behind a song, or even the aesthetics and presentation the instrument has in the greater soundscape. He believes that music is about passion and expression, and a good player should be able to put their own unique spin on other songs as well as be able to play the music they hear in their head.

Stimulating creative expression and ability is his biggest goal.