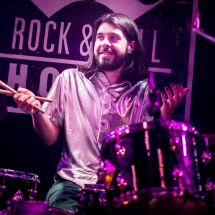 Donovan Duvall is a multi-instrumentalist (drums and keys), producer, and composer. He began playing music at the age of 9 by joining the orchestra in the percussion section. In middle school, he started playing drum set in the rock band at Sidwell Friends School. After listening to bands like Led Zeppelin, Radiohead, and Muse; Donovan knew he wanted to pursue music. After entering high school he joined the jazz band and began his intrigue into Jazz. Listening to "So What" by Miles Davis spurred Donovan's decision to study Jazz at college. At Guilford College his love of jazz and hip hop spurred his interest into learning production and composition.

Since graduating in 2016 with a degree in jazz percussion and performance studies, Donovan has performed on stages from Los Angeles to New York City. He's an active member in 8 groups in the D.C. area ranging from rock bands to bossa nova mixed with hip hop. He's currently working in his debut EP, a blend of jazz, hip hop, r&b, soul, and indie. In addition to playing live, he's helping produce records for artists spread throughout in the DMV area.

It was after hearing D'angelo's album "Voodoo" that really transformed Donovan's percussive style. He really stresses to play expressively and with feeling. Following the example of drummers like Brian Blade, Donovan strives to play with musicality and dramatic dynamics. He feels the most important skills a musician can have is the ability to listen well and adaptability. Donovan teaches his students how to express themselves through percussion through whichever style they feel pulled to. Whether it be rock, jazz, latin, or any other style, Donovan's main focus is to ensure learning music is a joyful practice not a stressful one.

After beginning to study percussion in college, Donovan started to teach himself how to play the piano in order to better communicate with fellow musicians and as a tool to write music. Taking his learning of music theory and jazz harmony, Donovan has become fluent in the styles of R&B and Neo-Soul. His background in percussion led him to find that the piano is inherently a percussive instrument. He believes the most important things to learn first are a good sense of rhythm and harmony.

Overall he thinks music is a tool to be used to spread joy and to better oneself. He wants the people he teaches to keep the "play" in playing music! Through his musical study and practice, Donovan thinks music has changed his life, and wants to help others feel the same.