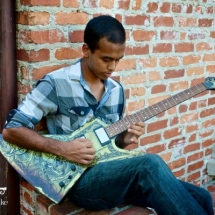 David was born on the nineteenth of October in Queens, New York. He
was first introduced to music at the age of eight, when his parents
enrolled him in piano classes in his hometown. When he moved down to
Florida at the age of 15, he started learning how to play drums at a
local church.

Shortly after that, David realized playing Guitar Hero wasn’t quite
enough for him so his father picked up an old guitar from a garage sale
a few months later. He immediately fell in love with it. About 3 months
later, David entered a Regional Competition known as “Top Nazarene
Talent” and placed first. He then got the opportunity to compete at
Trevecca Nazarene University and placed fifth in the region after only
playing for a short period of time.

Since then, he has played in many churches, venues and festivals with
local bands and talented musicians. His influences range from Pop,
Contemporary, Alternative, Rock and Metal. He hopes to help his
students find their own unique style by introducing them to the basics,
building a solid foundation of theory. He also highly encourages his
students to have fun while playing by adding their own unique zest.