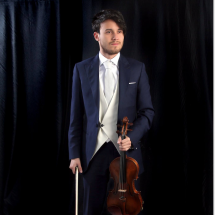 Leonard Bernstein's quote "This will be our reply to violence: to make music more intensely, more beautifully, more devotedly than ever before." is Daniel Torres musical motto. With an extensive teaching and performing experience, Daniel has been able to teach and perform in U.S.A and abroad, in Brazil, Peru, and Colombia to name a few, with musical projects focused on social transformation.

A Louisiana State Alumni (Geaux Tigers!) Daniel Torres earned his Master's of Music under the tutelage of Dr. Lin He. During his time at LSU Daniel was recipient of the prestigious David Chang Scholarship. Previously he was the student of award-winning violinist Anyango Yarbo-Davenport and teaching legend Mr. Fabio Santana (R.I.P). Daniel has received private lessons from extraordinary violinists such as: Leon Spirer (Former Berlin Philarmonic Concertmaster), Simone Bernardini (Berlin Phil), Alexander Kerr (Dallas Concertmaster) to name a few. Daniel also has a double major in Composition and Theory. His pieces have been performed specially in South America. Due to Daniel's compositional and theoretical musical background, he developed a proficient piano level.

Outside of the classical context, Daniel enjoys performing different genres which led him record with various groups such as: "Deadcentered," Jazz band "SanduJazz" and collaborate with diverse popular ensembles in Louisiana and Colombia.

Daniel is not solely focused on music; his hobbies and interests include: fixing his Jeep Grand Cherokee 2004, biking, watching his beloved NY Giants, LSU tigers and NY Knicks, writing poems and short tales, as well as collaborating in art projects with his friends, and playing soccer as a right wing. Also, as a native from Colombia he enjoys cooking Colombian food and watching Colombia National Soccer Team.