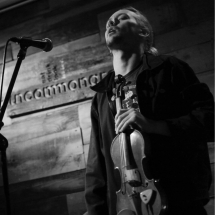 Danny Severance is a singer, violinist, and songwriter that thoroughly enjoys helping students get closer to music and find their sound. Danny started playing violin at age 5 and was classically trained through primary school and started writing soul songs, singing, and creating and exploring new styles on the violin around age 18, about 10 years ago. Born and bred in the Midwest (Chicago suburbs), Danny has based himself in NYC and LA respectively over the last several years. In terms of genre, Danny is versatile. Over the past 10 years, Danny has fronted multiple bands and I have backed or recorded for other artists such as Prateek Kuhad (NYC/Indie - singer-songwriter), Baby Alpaca (New York City - soul pop), The Vampyre Bunnies (New York City - punk rock), Valley Shine (Los Angeles - folk pop), Orlando Vick Jr. and Divine Glory (New Jersey - gospel). Through my career so far performing my original material, Danny has performed at various notable venues across the country such as The Viper Room (Los Angeles), Hotel Cafe (Los Angeles), Harvelle's - Long Beach, The Knitting Factory (Brooklyn), Uncommon Ground (Chicago), Will's Pub (Orlando), among many others. In addition to creating and performing original material, Danny also does weddings and events and was a regularly featured live improv violinist with the DJs at Sunstruck Sundays in 2014 on the rooftop of NYC's Gansevoort Hotel - Meatpacking.

Beyond playing violin for nearly 25 years and fronting bands for 10 years, Danny's teaching experience comes from a few different sources. In 2014-2015, as operations director and mentor with non-profit Off The Wall Graffiti in LA, Danny regularly mentored young people who were getting in trouble for doing graffiti in the streets and needed guidance and a positive way to be creative. Danny was known as the "Music Mentor" at OTWG and helped those graffiti writing kids who wanted to funnel their creativity into a positive musical outlet.