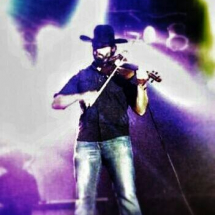 Dan Emmett started out in music on piano in Rochester, MI at the age of 8. Less than a year later, he added violin, and has been playing both ever since. Dan studied a variety of methods under renowned violinist Alex Depue growing up, playing in numerous orchestras and regional events. He later added the electric fiddle to his repertoire, exploring the various sonic possibilities with guitar effects and amplified sound. With that, he began studying Rock, Country, and improv based music. This has contributed heavily to his teaching style, as he offers the student freedom to explore the music beyond the written notation in a fun approach. In college Dan studied music further and found a home in the touring scene shortly after. He has played from coast to coast in many top music venues, and has performed with national acts such as Drivin n Cryin, Jason Sturgeon, Connor Christian, Tyler Reeve, Derryl Perry, Sol Junky, The Whiskey Gentry, and many other