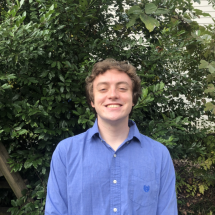 Dallas McCorkendale was born and raised outside of Savannah, Georgia. At the age of 9, he began studying guitar and saxophone. Shortly thereafter, he began bassoon and marimba studies. Dallas participated in a number of state and national level music honors programs throughout his childhood including the Georgia All-state band and Governor's Honors Program. At the age of 15, Dallas began to study jazz from a number of local professionals in Savannah's thriving jazz scene. In 2016, Dallas moved to Atlanta where he began studying Music Technology at Georgia Tech. While at university, he taught himself the piano and within roughly 2 years had transitioned from being primarily a guitarist to being primarily a pianist.

Today, Dallas is an active member of the Atlanta jazz, hip-hop, and RnB communities. He can often be found rehearsing, performing, composing, arranging, or just hanging out with Atlanta artists from a wide variety of musical backgrounds. Outside of playing music, Dallas enjoys hiking, teaching, cooking, and comedic writing. For him, teaching, cooking, and comedy are just as deep of an artistic passion as music. He would be honored to share the gift of music with you and your family!