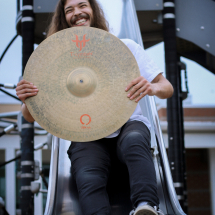 Drumming since age 12, Conner has amassed a decades worth of experience playing hundreds of live performances in varying musical contexts with his own groups, as a hired touring/session musician, on recordings, in collegiate settings, one off collaborations, solo performance and last minute fill-in gigs. In 2015 Conner moved to Los Angeles California and studied Drum Performance at Musicians Institute.

With a background in DIY ethos he successfully booked 40 dates for YOY in Seattle, Oregon and California - between June 21st 2018 and February 2nd 2019 as well as helping secure radio play in Washington, California and cost to cost across Canada for the band. Within 14 months of Moving to Seattle, Conner played 71 gigs, 40 with YOY and 31 as a hired drummer in Seattle.

2019 has seen Conner continue to perform in the Pacific Northwest with Seattle bands YOY, Dusty, Meanderthals and Black Ends.
After touring the west cost in summer 2019 with Meanderthals he masterminded "SoulSoup 1 : Fake Jazz" a compilation record featuring 12 Seattle artists in which he has played live with 6. On the Album he contributed his drumming to 3 tracks and debuted his own band DEATH LETTUCE in which he composes all the music.

This album is in the spirit of celebrating music for being an intrinsic part of the human experience and the project will be released December 13th 2019 through Den Tapes Records.
In August 2019 he landed his first endorsement with T-Cymbals.

Conner Satyro is human being and calls Seattle Washington home.