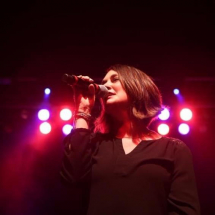 Born in New Orleans, LA, music has been a part of Chrysta Maricelli’s life since as long as she can remember. As the daughter of a pastor, she was raised amidst a world of music, leading and performing in musical productions from an early age. With a focus on vocals, piano, rhythm and percussion, she found a passion for practicing and teaching the art of music to those of all ages.

As a vocalist, she has been trained in various forms, styles and languages from around the globe. Her vocal pedagogy extends beyond the modern language barrier, to include English, Latin, German, French and Italian. Trained in vocal anatomy and physiology, her aural understanding extends beyond the book into composition, performance, arranging and orchestration.

From composing music and leading musical productions at a young age, she was brought up studying and performing instruments from percussion to the strings and beyond. Versed in the classical arts, she transitioned from the sacred to the secular arena and continued her studies into the contemporary performing arts and other nonwestern musical art forms. She used her foundation in technical and performing arts to train and mentor both amateur and veteran musicians who continue to inspire and mentor her today.