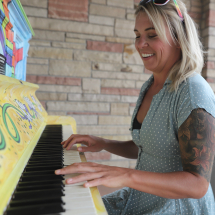 Christine originally hails from the state of South Dakota.  Growing up in Rapid City, there wasn't much to do but learn to play instruments, so at the insistence of her grandmother at age 7, she began the piano.  At 9, she took up the cello, and at 10 she began playing the violin and the flute, as the list of instruments continued to grow to include the piccolo, oboe, guitar and bass. In 2003, Christine moved to Ft. Collins, Colorado to attend Colorado State University where she studied a minor in Music on the violin and a double major in Psychology and Economics.  Growing up, Christine also spent a great deal of time in the theater.  From school to community theater, she directed, produced, acted, played in the orchestra pit, understudied, and did costuming. She also spent almost a decade singing with the Sweet Adelines (a worldwide competitive women's acappella barbershop organization) beginning in high school.  Choruses include Acappella Showcase (Rapid City, SD), Skyline (Denver, CO), Enchanted Mesa (Albuquerque, NM), Carolina Style (Conover, NC) and Queen City (Charlotte, NC) and gave her the foundations for singing.

After moving from SD to CO to NM to NC, Christine stepped into a piano bar (Howl at the Moon Charlotte) in June of 2011.  She immediately fell in love with the show and decided that she wanted to get on stage and rap "Ice Ice Baby" and the rest is history! After a few months of training and learning pop songs on the piano, she was transferred to Howl at the Moon in Kansas City, MO.  In Oct of 2012 she moved to Little Rock, AR to work at Ernie Biggs.  In 2014 she began freelancing and applied to work at Carnival Cruise Lines.  In May of 2014 she started her first contract on the Carnival Inspiration out of Long Beach, CA.  Over the last 5 years you may have seen her antics on the Carnival Breeze, Pride, Sensation, Legend, Splendor, Sunshine, Magic, Imagination, Dream, Valor, Fascination, Ecstacy, Conquest, NCL Getaway and/or the NCL Epic.  She now bases on out Denver, CO, working with the Dueling Pianos Roadshow and freelancing shows around the country.

Now that she's back on land, she's looking forward to teaching and sharing the joy and value of learning to play music to the next generation of musicians!