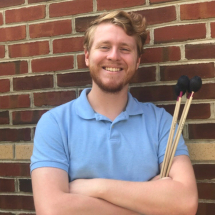 Christian Ortolf is a percussionist and drummer from Yardley, Pennsylvania who is currently studying under Dr. Lee Hinkle and Danny Villanueva at the University of Maryland School of Music. He enjoys teaching students of all ages and abilities, especially those who are new to percussion. It is his goal to instill in everyone he meets the same passion and excitement of music that he wears on his sleeve.

With experience spanning more than a decade in the performing arts, Chris has played in his public schools' jazz ensemble, concert bands, symphonic band, honors band, community band, and marching band. He toured with the Pennsbury Marching Band through California and Australia, and while touring he performed at many locations, most notably Disneyland and the Sydney Royal Easter Show. At the age of eleven, he auditioned and performed with the Youth Orchestra of Bucks County's intermediate division wind and string orchestras, as well as their advanced student percussion ensemble. Two years later, Chris toured the youth orchestra all around Italy before successfully moving up to their advanced division string and wind ensembles. He stayed in this division for one year, and eventually auditioned into the Philadelphia Youth Orchestra where he stayed until it was time to leave for the University of Maryland. Here, Chris performed under the Baton of Maestro Louis Scaglione, as well as occasionally being conducted by Maestro Rosalind Erwin when working with the Philadelphia Young Artists Orchestra. Recently at UMD, Chris has performed many concerts under the direction of Dr. Andrea Brown and Dr. Lee Hinkle, and looks forward to many more. He just recently finished performing an eight-show run of the musical "Side Show Revival" with the student troupe Wildwood Summer Theatre.

Chris is excited to show each of his students the tip of the iceberg that is the massive world of percussive studies. He encourages his students not to fear drums. He believes beginning with a single snare drum and/or small mallet instrument coupled with learning new notes can be quite self-rewarding. As their studies continue, Chris urges his students to venture into new musical styles, ideas, and techniques that will further increase their playing and learning ability. With an entire world of different instruments and ways of playing them from unique and interesting cultures, no potential or upcoming student should ever fear not finding a type of percussion they love.

Chris loves music not only because he believes it is the best language to convey direct emotions, but also in part because he grew up in a house with three flautists. Music, to him, is being able to have whole conversations without speaking a word. Every piece he learns is a new chance to make it his own stylistically. He enjoys just about any kind of music that could use a drummer or percussionist, and is constantly looking for opportunities to perform classical, opera, ensemble, jazz, latin, rock, contemporary, or show music. While he is classically trained, he loves to stretch his bounds and pick up new instruments and skills, as long as they require hitting. He enjoys teaching in a one-on-one setting, and loves to work off of a student's energy and interest in specific areas of music. Chris believes above all else, giving a good lesson in music also serves as giving a good lesson in life.