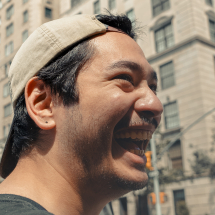 Christian Honda is a Florida-born musician who began passionately playing guitar at the age of seven. Growing up, he participated in several musical ensembles throughout middle school and high school before finally officially pursuing a career in music. He is currently in his final year of his Bachelors, pursuing a degree in jazz guitar at the University of Central Florida studying under Bobby Koelble. Christian is a versatile guitarist capable of playing a variety of genres of music from jazz to punk rock and many more. A familiar face in the Florida music scene, currently plays in several groups around the state such as his rock band "Gazazi" and local jazz groups in the Orlando area. Christian is no stranger to the life of a musician whether on stage or in the studio.

As a student himself, Christian understands that one of the most important things in teaching a student is being patient, capable of teaching technique and theory in a relaxed and engaging manner. His love for music and his love for connecting with people makes him a teacher that values the student's musical learning experience whether they wish to be a professional musician or rock out to their favorite song on the radio.

In his spare time outside of his musical endeavors, Christian enjoys going out to concerts, collecting vinyls, and reading books in his home.