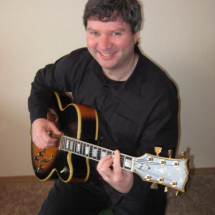 Chad Walker began playing trumpet at age 10 in his elementary school band. By age 12 he changed his focus to playing guitar, taking lessons from his father. Born and raised in Atlanta Georgia, he grew up in a family with a long musical tradition.

Many of his musical influences came by way of R&B, Dixieland swing, Rock, Punk and progressive jazz of the 60’s, 70’s and 80’s. Chad had the privilege of catching performances by some of the greatest artists of the 20th century, such as Miles Davis, Tony Williams and Freddie Greene.

Throughout the 1990’s Chad played guitar in various projects and occasionally toured throughout the southeast and east coast. In 1997 he relocated to Seattle Washington, earning his degree in Instrumental Performance while studying guitar with notable performers such as Milo Petersen and Steve Kim. He currently plays guitar and trumpet for various groups around the Puget Sound region.

Chad is passionate about teaching music lessons in Seattle. He brings to the table both his musical knowledge and life experiences with music. He emphasizes how learning an instrument can be a fun and enjoyable experience. He provides a common sense approach to learning by demystifying basic aspects of music theory, especially as it applies to guitar playing. Chad teaches Guitar Lessons to any skill level, ranging from the absolute beginners to the more experienced players.