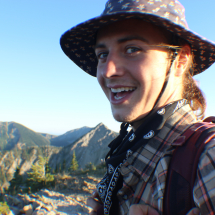 Anyone who has met Caen, will say he is an incredibly positive, energetic, patient, and friendly person. He believes in working hard and having a good time doing it. Caen loves learning, in all its forms, and teaching others about his passions seems to be effortless. Music has always been a part of him; However, teaching, he says, has become the way he gives it back.

Caen ("Kay-en") is a guitarist, saxophonist, songwriter, and pianist who started his relationship with music at 4 years old and it quickly became his greatest form of self-expression. Since then he's been learning and passing on that learning anyway he can, on any instrument, he can get his hands on. He received classical training in alto saxophone and piano for many years all the while band classes, recitals, performances, and composition were strengthening his musical theory. Then he hit the road, to see what was out there to discover. He was a skiing and snowboarding instructor for 3 years, teaching all levels and ages, whose daily goal was a smile from every one of his students.

Caen is often quoted saying "Music is OUR language" and in his years of traveling, everywhere he went, he found out that the sharing of music immediately crossed all barriers to connection. He decided the way he could bring good into the world to be the language of music. Along his travels, he was exposed to many instruments, including the classical guitar, violin, harmonica, cajon, flute, clarinet, didgeridoo, trombone, and congo drums. He can play them all to varying proficiencies but the guitar became a life-long passion. He has been playing and teaching piano and guitar (among others) for over 10 years now and has taught dozens of other people of all ages across the globe.