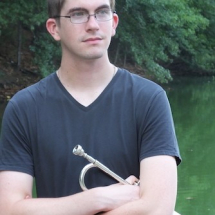 Bryan Ashmore is a trumpet player based in Atlanta, Georgia. Born in Conyers, Georgia, Bryan grew up in a household full of music and knew from a young age he wanted to be a musician. He recently graduated with his Bachelor of Music degree from the University of South Carolina where he received training in both classical and jazz realms and gained performance experience in both styles. Bryan has performed with the top Ensembles at the University of South Carolina, toured Mexico with the USC Trumpet Ensemble, and performed with two Atlanta Big Bands: The Big Band Contractors and The Sentimental Journey Orchestra. Bryan has also performed with pop groups such as the Drive Time Band in Atlanta and Homebrewed in Columbia. He studied under many great artists such as James Ackley, Allen Vizzutti, Bert Ligon, Bryson Borgstedt, and Craig Butterfield. He is currently teaching at music camps, marching band camps, masterclasses with local schools, group lessons at the Atlanta Music Project, and maintains a private studio.