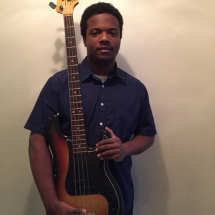 Brandon Boone, a native of Augusta, Georgia, is an Atlanta-based bassist. Growing up in a very talented household, music runs deep in the family. His father is a church pianist/minister of music and his brother is a professional jazz drummer in the Atlanta area.

Attending high school in Augusta, Brandon has had the opportunity to study under bassist Travis Shaw and saxophonist Joel Cruz. While doing so, many doors opened up in the Augusta music scene. Brandon is a member of the Augusta's Young Lions project and has performed in numerous venues including the Bell Auditorium. He is three-time recipient of the Louis Armstrong Jazz Award and John "Doc" Bradley Jazz Award in 2013. Brandon was selected as a member of the All-State Jazz Band, Governors Honors Program, and the All-State Orchestra, where he played percussion.

Moving in from Augusta as an avid performer, Brandon shares much of his traditional jazz influence in many genres such as rock, hip-hop, funk, and fusion. He has had the pleasure to perform, record, or study with Rodney Whitaker, Wycliffe Gordon, Tim Armacost, Joe Martin, Sam Skelton, Trey Wright, Tyrone Jackson, as well as many other highly respected musicians. Brandon is currently studying jazz bass with Marc Miller and jazz drums with Justin Chesarek at Kennesaw State University. He is thankful to have found himself in his current situation with great teachers and looks forward to the next step in his music career.