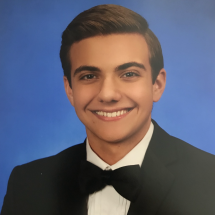 Brandon Bailey is a talented musician and teacher from Orlando, Florida. He both performs on French horn and trumpet and has been teaching both instruments since 2015. His love for music started in as a child when he first picked up a trumpet and later added the French horn. In high school he attended a fine arts magnet program and later began studies at the University of Central Florida. Brandon performed at Carnegie Hall in 2018 and has participated in master classes with major composers such as Frank Ticheli. His love for music also extends into the theatre world where he can often be found performing in pit orchestras for productions in the local area. While he is experienced in many styles of music his main area of focus on French horn is classical music and on trumpet his focus is on jazz. Brandon has always had a love for music and for expressing this love to others in hopes to grow the music community he has come to know and love.