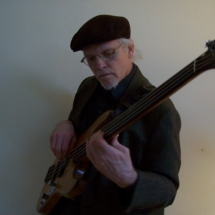 Bill Rea is a composer, bassist, guitarist and cellist. His musical background and training is unusual and varied. At an early age, he studied the theory and counterpoint methods of Palestrina, Walter Piston, and Paul Hindemith. Primarily self-taught as a composer, his only formal compositional studies were from 1991 to 1997 with Hannetta Clark, former assistant to composers Arnold Schoenberg, Ingolf Dahl, and Halsey Stevens.

Bill’s primary musical experience throughout his career has been his thirty-six year position as bassist, guitarist and keyboard player with the groundbreaking and innovative Glenn Phillips Band, and The Supreme Court, with 14 album credits between the two ensembles.

As a composer Bill has composed chamber works, compositions for piano, harpsichord, voice, percussion, electric bass guitar, orchestra, and works for dance. Two of his piano works were recently released on an album entitled “Through an Open Window”, performed by pianist Lucy Wenger, and produced by Grammy winner David Frost. This recording features Rea’s “A Dissimulation of Birds” and “Variations on an Irish Song. Commissions for Bill’s compositions have come from Ondine and Company Dance, Atlanta Council for the Arts, the Cultural Olympics (Atlanta 1996), Music Teachers National Association (Georgia Composer of the Year, 2000), and performers including Laura Gordy and Peggy Benkeser of Thamyris, DaVid Pineda and Tirza Kosche of the Atlanta Chamber Orchestra. In January, 2005 PBS radio aired an hour long program on The Atlanta Music Scene dedicated entirely to the music of Bill Rea. His Toccata for Piano was performed by pianist Tracy Xian as the encore for the opening recital of the Tobias Matthay International Piano Festival in 2010.

Bill studied cello with Alice Williams at the Georgia Academy of Music, and was cellist with the DeKalb Symphony Orchestra for 10 years.

Bill lives in Atlanta with his wife, Roxanne, a musician and filmmaker. Together they own and operate the print music retail store Hutchins and Rea.