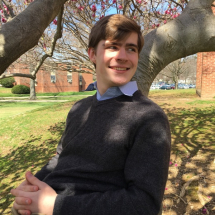 Bennett Spotts is a professional vocalist and instrumentalist based in northern Maryland. He received his Bachelor of Music degree from Westminster Choir College, where he studied under accomplished performers and pedagogues including Elem Eley, Jim Goldsworthy, and James Jordan.

When he was nine years old, Bennett began playing the saxophone in the school band, and his life has been full of music ever since. By high school, he had begun playing the French horn and singing. He participated in many county and state-wide events, including being principal alto saxophone in the Maryland All-State Band, and singing in the NAfME All-National Chorus. Since leaving high school, Bennett has worked professionally in pit orchestras, performing arts camps, church choirs, and more, in addition to giving private lessons.

During his time at college, Bennett had the chance to take advantage of some incredible opportunities, such as performing in multiple opera productions and taking part in summer programs. He participated in the Language of Lieder program in Vienna, Austria, where he received intensive instruction in the German language, and sang in master-classes and coachings with Norman Shetler, Wolfgang Holzmair, Sholto Kynoch, and others. Bennett sang in five different choirs through his time at Westminster Choir College, including the Westminster Symphonic choir, which regularly performs with the Philadelphia Orchestra, and the Williamson Voices, which is the resident choir at the Oxford Choral Institute, a summer program for conductors in Oxford, UK. These choirs gave Bennett the opportunity to sing in venues such as the Lincoln Center, the Kimmel Center, and the National Cathedral.

Bennett had the opportunity to use his instrumental talents, as well, while in college. He was regularly involved in the pit orchestras for his school's student-run musical theatre club, the Westminster Players. He also had the chance to be the music director for their production of Next to Normal. Additionally, Westminster Choir College regularly held Student Composers concerts, where Bennett would frequently premier new compositions written by his classmates.

Bennett loves working with passionate musicians at all levels. He sees a music lesson as a collaboration between the teacher and student, through which both of them end up learning something new. In his lessons, Bennett is interested in giving students the necessary tools to continue growing and exploring as musicians on their own, even after they have stopped taking lessons. His teaching style aims to instill in his students the fundamental principles of technique, and a foundational understanding of music theory, through the exploration of varied, exciting repertoire.

On the matter of a student's practicing, Bennett's piano teacher in college would always say, "Don't practice. Play." A musician should play an instrument because it brings joy, not because a teacher says to do so. Making music can be an extremely rewarding and joyful endeavor, and Bennett seeks to create an environment in which students can experience it fully.