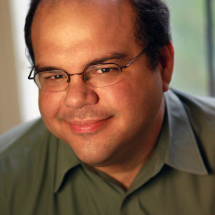 Composer, conductor, and pianist Dr. Armando Bayolo began musical studies at the age of twelve when he began piano lessons in his native Puerto Rico. At sixteen, he went on to study at the prestigious Interlochen Arts Academy in Interlochen, Michigan, where he first began the serious study of composition. He holds degrees from the Eastman School of Music (B.M. 1995), Yale University (M.M. 1997), and the University of Michigan (D.M.A. 2001).

Armando's music has been commissioned and performed throughout the world by some of today's most important musicians and ensembles. He is the recipient of important commissions and awards from the Aspen Music Festival, Fromm Music Foundation at Harvard University, the Music Department of the National Gallery of Art, the Arts Councils of the states of Iowa and North Carolina, the Cintas Foundation, the Minnesota Orchestra and American Composers Forum, the Consortium for a Strong Minority Presence, the all-Virginia Intercollegiate Band, and the Festival Interamericano de las Artes.

Besides being active as a composer, Armando is an "adventurous, imaginative and fiercely committed (The Washington Post) advocate for contemporary music in American culture through his activities as Artistic Director and conductor of Great Noise Ensemble, curator, from 2011-2014, of the New Music at the Atlas series for the Atlas Performing Arts Center in Washington, and as a writer for such publications as Sequenza21 and NewMusicBox. As a conductor of "precision, imagination and tangible electricity" (The Washington Post), Armando has led Great Noise Ensemble to become the premiere contemporary music ensemble in Washington, D.C. and one of the most important arts organizations in the District of Columbia. He has specialized, particularly, in the music of Louis Andriessen, leading the first professional American ensemble performance of De Materie in 2010 and of La Commedia during the 2013-14 season as part of a week-long festival of Andriessen's music he curated in honor of the composer's 75th birthday in 2014.

Armando has been featured on Public Radio International's Studio 360 broadcast out of WNYC in New York and on the NPR program Fresh Ink broadcast out of WCNY in Syracuse, WQXR's Q2, as well as the Washington Post and the New York Times' Opinionator Blog. He has also contributed articles to New Music Box and Sequenza21, where he was a Contributing Editor until 2011. As an educator, he has served on the music faculties of Reed College, Hamilton College, the Peabody Conservatory of Johns Hopkins University, and Southern Illinois University, Carbondale, where he coordinated the Outside the Box new music festival. From 2013-15, he served as guest faculty with the Charlotte New Music Festival. He is the recipient of a 2011 Fromm Foundation grant from Harvard University, the 2008 Brandon Fradd fellowship in music composition from the Cintas Foundation, a fellowship from the Consortium for a Strong Minority Presence from 2006-2008 and various other awards and honors from the American Composers Forum, the University of Michigan, BMI, ASCAP and the arts councils of Iowa and North Carolina. His cello concerto, Orfei Mors and the cantata, Kaddish:Passio:Rothko, were each nominated for the Pulitzer Prize in music. His music can be heard on the Sono Luminus, Inova, New Focus, and Great Noise labels and is published by his own imprint, Olibel Music and available through his web site.

Although he's worked primarily as a composer for the last ten years, piano is Armando's first love. He has primarily performed as an accompanist for singers and choirs, although he very much enjoys performing chamber music and classic solo works for the piano. His last major public performance as a pianist was in Steve Reich's Music for 18 Musicians with Great Noise Ensemble.

As an instructor, Armando believes fully in developing an appreciation for the arts through music study with his students. He is an experienced instructor who has spent his post-collegiate career teaching in a variety of settings. His goal is to infuse the love of music in every student and give them an outlet for creativity, expression, and fun! Armando's own journey has been shaped by having this opportunity, and he enjoys connecting the dots in every student's interest -- whether they want to play pop songs, classics, or create their own music. Not every student will go on to become a virtuoso, nor should they have that as their sole goal. Armando's mission in music education is to provide the tools for every student and let them fully explore the beauty and possibilities music has to offer.