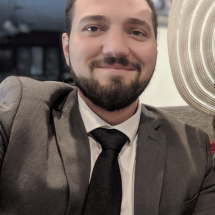 Education:
I was very involved in highschool band. I went to Valencia college for music performance but didn't get a degree.

Anthony James Aliseo has been working on perfecting his craft since the age of 11. Shortly after he started taking lessons as a child, he began to idolize his favorite drummers. Wanting nothing more than to be able to live up to his newly found heros, he began to practice. For years he worked learning his favorite songs, mastering correct technique, and developing his own unique style as a musician. All of this paid off at the age of 19 when he embarked on his career as a professional musician. He has since played and recorded music for dozens of bands across a wide range of genres such as rock, funk, gospel, metal, pop punk, blues, and many more. Anthony has showcased his talents all over the United States as well as Europe. Today, Anthony focuses on new challenges such as working towards recording his own album, co-hosting a professional entertainment podcast, and most importantly passing on what he has learned to his students. More than anything, he loves music and wants to help others love it just as much as he does.

I was very involved in highschool band. I went to Valencia college for music performance but didn't get a degree.