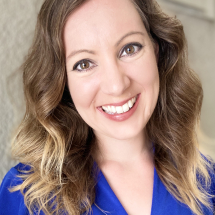 Anne Martin is a professional voice over artist, singer, vocal coach, Disney cast-member, and music educator who’s been teaching for 11 years, and performing for over 20 years. She was born and raised in Ohio where she began her career as a singer at the age of 13. She studied voice weekly for 7 years, and then received a scholarship to study voice in university, later graduating from Mount Vernon Nazarene University in 2007 with Bachelor’s in Music. As of September 2021 she has also completed New York Vocal Coaching’s Voice Teacher Training Course with the renowned Justin Stoney.

As a music teacher, Anne has experience working with all ages, varied class sizes, and different cultures both in person and online. She taught piano and voice for several years before becoming a certified public-school music teacher in Florida where she gained skills needed to differentiate for a variety of unique needs students may have when learning. In addition to teaching in the schools, she also has worked as an Activities Director for senior communities in Florida and has taken several courses related to family science and music with elder care. During those seasons of life, she was also a traveling vocal coach and children’s piano instructor. More recently she has taught both group and private voice lessons to over 1200+ children and teens around the world, all online through a company called Outschool. In addition to teaching music, she has taught over 2000 online English classes to students in China through VIPKID.

As a vocal performer, Anne has sung for a wide variety of events in choirs, solo concerts, and musical theater productions. Her favorite role being “Sandra Bloom” in Big Fish at Sarasota Players. It was through a production of “Phantom” in 2016 that she met her now husband, who is an actor and vocalist. In 2017 they started their own business and provided a variety of entertainment around Florida. They are now known as “The Martin Duo”, performing themed concerts and singing for special events around the state including but not limited to performances at the Tampa Ray Bays, Edison and Ford Winter Home, various yacht clubs, restaurants, retirement communities, and etc. Anne also was a member of Sarasota’s professional choir, the Choral Artists for the 2017-2018 season.

As a voice-over artist, Anne has recorded several books with her husband through World Book, has provided singing demos and instructional vocals for the “Singorama” course, and is the process of writing and recording songs for a new children’s program not yet released called “The Mooshies”.

As a personal vocal coach & voice teacher, Anne desires first and foremost to encourage other singers to set their voice free today and not let anything hold them back. She is passionate about helping singers who’ve overcome many obstacles just to be where they are today and wants to help them find freedom, hope, love, and joy in singing. She also does enjoy teaching needed vocal techniques and is known for developing specific written plans for her students to use as guidelines in their training. As a voice teacher she teaches specific technique applicable to multiple styles of music including sight reading and ear training. However, as a vocal coach she specializes in coaching performance ready material in Musical Theater, Folk, Jazz, and Classical Crossover genres.