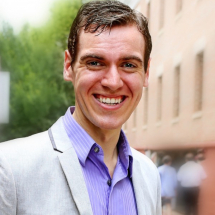 Andrew Sauvageau has been a musician for as long as he can remember. His parents keep a recording of him, aged about 3, singing and "composing" songs on the spot. Andrew feels that this kind of spontaneity and spirit is an important part of music making, and he continues to look for ways to bring music to life, whether it was composed six hundred years ago, or six seconds ago.

Originally from Oregon, Andrew began performing publicly as an 11-year-old, in genres ranging from musical theatre to art song. In high school, he made music a major portion of his studies, opting to take choir, band, music theory, and a variety of extra-curricular opportunities. He earned a bachelor's degree in Vocal Performance at the University of Oregon, and did his master's and post-graduate work at the Peabody Institute of Johns Hopkins University.

As a soloist, Andrew has appeared with the BBC Symphony Orchestra, New York City Opera, the Birmingham New Music Group at the Library of Congress, Great Noise Ensemble, Silver Finch Arts Collective, St. Petersburg Opera, Cathedral Choral Society of Washington, the Basilica of the National Shrine of the Immaculate Conception, and at Tanglewood Music Festival, Lucerne Festival, among others. He is particularly interested in classical music, and 20th and 21st century genres ranging from contemporary classical, musical theatre, and jazz.

Andrew believes that a firm understanding of art benefits everyone. The study of music cultivates creativity, as well as establishes discipline and a joy of learning. Studying singing in particular helps to develop a huge variety of skills, not limited to diction, language ability, self-assurance, and athleticism. The tools used for singing are useful beyond the classroom and the stage.