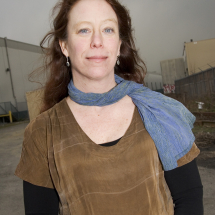 Multi-instrumental composer and vocalist Amy Denio was born to a musical family and began singing as a toddler. She excelled in music as a child, and performed throughout the Detroit area with her elementary school’s musical ensemble. At age 6 she started studying piano, and at age 12 she commenced playing the guitar and learning music by ear. In college she studied music history and theory, and also added electric bass, saxophone, accordion, and clarinet to her musical menagerie. She excels in making up songs, composing chamber music, and improvising.

Denio has more than 25 years of experience teaching music privately, as well as conducting workshops on composition, technique and improvisation throughout the US and Europe as well as in South America. She plays and teaches voice, piano, guitar, electric bass, saxophone, clarinet and accordion.

She loves American folk, jazz and rock music, and during the last 30 years of traveling the world as a professional musician, Denio has also studied with and collaborated with musicians from throughout Europe, ex-Yugoslavia, India, Japan, Taiwan, and Latin America.

She is an award-winning composer and music producer and has written nearly 500 works and produced over 50 recordings solo and in collaboration with artists worldwide. Based in Seattle, she runs her own recording studio, record label and publishing company, Spoot Music. Denio has played concerts solo and in collaboration with international artists in festivals, clubs, squats, prisons, churches, sanctuaries, subways, and inside abandoned buildings on 6 continents.

A composer for modern dance, film and theater, she has been commissioned by award-winning choreographers such as Pat Graney, David Dorfman, Chiao-Ping Li, and Vickie Marks. She has also composed scores for feature films, theater works, multi-media performances, and television. She has received numerous international awards and fellowships. On January 1, 2020 she released ‘Truth Is Up For Grabs’, her newest work for 22-piece orchestra ‘Truth Is Up For Grabs’, a full-evening work funded by Seattle Mayor’s Office of Arts and Culture and 4Culture, and sponsored by the Seattle Composers Alliance.

She also makes short films and is writing a bi-lingual book of travel stories (Italian/English). During her COVID-19 self-quarantine, she has been hosting and producing SPRING FORTH, a weekly on-line webcast during which she invites the public to sing and play along with her.