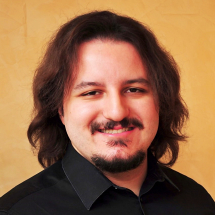 Alex Isayyid is a guitarist, singer, composer, songwriter, and producer from Orlando, Florida. He has been studying music since he was seven years old, and has explored as many facets of music as he could since then, from playing in bands and singing in choirs to recording music. His musical experience eventually led him to the world renown Berklee College of Music, where he graduated with a Bachelor of Music in Film Scoring, while continuing to study guitar under some of the worlds best instructors.

It all began when Alex heard the fiery playing of Eddie Van Halen. Inspired by his performance, it was from that moment he knew he wanted to play guitar. With a new found passion of music through exploring the rock greats, he quickly began to take music seriously and sought out instruction from one of the most respected guitar players/instructors in Brazil, Mauro Hector. Under his study, his proficiency and knowledge as a musician expanded immensely. Moving back to his hometown of Orlando, in addition to continuing his guitar studies, he began to sing. He sang with several vocal groups and choral ensembles, where he got great opportunities such as singing with Disney, and as a soloist in a collaboration with the Orlando Philharmonic, as well as playing guitar in several bands.

He continued to pursue his lifelong musical journey at the prestigious Berklee College of Music in Boston. He came out of the program with several experiences ranging from singing in professional choirs, collaborating with the Boston Pops Orchestra, being in musical projects that resulted in viral videos, playing guitar in rock bands, producing and conducting orchestras for film and video game scores, and playing guitar on several of his colleagues' projects. He is now an eclectic, well-rounded musician, who continues his work writing, recording and producing music through collaboration with others as well as his own work.