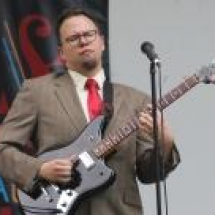 Alex Gordon has "officially" been playing the guitar since he was 14. Unofficially, he began strumming a tennis racket two years prior to
that, inspired by the films The Buddy Holly Story and Back To The Future. Once "official" guitar lessons began with an actual guitar, Alex
quickly progressed with a passion and a hunger for learning that propelled him to practice constantly. Taking inspiration from legendary
guitarists such as Chuck Berry, Eddie Cochran, Jimi Hendrix, Mark Knopfler, and Scotty Moore, Alex played in a succession of high school
rock bands that allowed him to discover a love of performing.

Alex attended the Atlanta Institute of Music where he graduated with Honors in 1995. With a strong foundation in harmony, theory,
composition, performance, and recording, Alex would go on to lead and perform in various bands as well as perform as a touring solo
singer songwriter in venues across the country. In recent years, Alex has been specializing in playing chord melody arrangements for solo
baritone guitar and he has recorded and produced over 20 CDs and digital EPs. As a composer, Alex has written musical works for PBS,
the Alliance Theater, and the Georgia Aquarium.

Alex currently serves as producer and creator of Alex Gordon Radio which is a weekly internet radio show for young people.