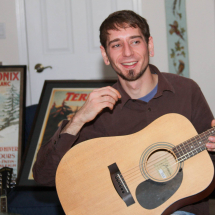 Aaron Levine is a guitar, banjo and recording instructor based in the Northern Virginia area. As a professional musician and Audio Engineer, Aaron is intent on interpreting and conveying the shared history of our music to his students. Through his passion for his craft he strives to instill a love of music in his students while emphasizing community. He believes our shared history of music is a basis for this community and encourages students to not only practice but to have fun with it – both during and outside of lessons. Aaron began taking private lessons on guitar at age 7, continued so through middle and high school, loves to sing and reminisces of having the most fun in choir and Jazz Band. After high school he studied Music Theory at Northern Virginia Community College and graduated top of his class from The Omega Studios’ School of Applied Recording Arts and Sciences in Rockville, MD. Following Omega, he made his living running live sound and recording artists in the DC Metro area on a freelance basis and for various companies including Blue Ridge A/V and Lighting. During this time he continued to gig with bands and produce original music.

Much of his engineering work has been with choirs, a’capella groups and bands of all genres. Through the National Association of Broadcasters he was hired by American University in Washington DC to work with the Engineering Department of WAMU 88.5FM. He rose to the position of Production Coordinator for WAMU’s Bluegrass Country 105.5FM, the world’s longest running bluegrass radio station. This position put him in charge of the recording and broadcast studio acting as a recording, mix and broadcast engineer for all Bluegrass Country events. In working with top bluegrass and old time musicians, historians and broadcasters he immersed himself in the music’s history. His goals were reshaped and he has transitioned to teaching for a living. He loves surrounding himself with musicians and decided he was to play his instruments everyday.

Aaron began his teaching career through A and A Music in Ashburn, Virginia while working as an Audio Engineer. Over the years he has taught all age groups via individual and group lessons on various string instruments. For the last five years his focus has been on old time and bluegrass music with forays into Dixieland, jazz, gypsy jazz and blues. His professional performance career has included playing with many groups including the Magpie String Band. With the Magpies he utilized steel string acoustic guitar, electric guitar, mandolin, dobro and banjo. For banjo, his focus remains on clawhammer, two and three finger index or thumb led as well as Scrugg’s style. He teaches finger style and flat picked guitar and accepts all students. Due to his engineering background he also offers recording and mixing instruction. Teaching has shown him the plethora of students which yearn to record their music but have limited access to gear. His goal is to help instruct students how to produce the best music they can with whatever gear they have access to by utilizing the fundamentals of acoustics and recording.

Outside of teaching, he is currently building repertoire on various instruments including dulcimer, autoharp, harmonica and bones. As an avid runner and backpacker he enjoys exploring our area’s history and practices archery as often as possible. On a normal evening he can be found learning new recipes with fresh veggies from his garden while serenading his cats. Along with fellow DC musician, Henry Meyers, he performs old time music at local breweries and wineries. His love of music has led him towards woodworking and he is currently building a gourd banjo. At his home recording studio he mixes local artist’s music, dialogue for various podcasts and produces his own music. When not teaching, jamming with friends or engaged in practice, he takes advantage of the many bluegrass jams our area has to offer. He has deliberately built his life around his love for music so as to sustain and grow without sacrificing his passions.

Aaron believes positive reinforcement to be paramount in music instruction and conducts his lessons in this manner. In lieu of simply ordering students to practice, his focus lies in discovering why each student has chosen to pursue their given instrument so as to make practice between lessons something to be looked forward to. He understands building the fundamentals, while necessary, is not the factor driving students’ musical aspirations. In order to build said fundamentals he works with students to identify specific goals, builds lesson and practice plans around having fun with the process and finds a productive way to identify progress through positive reinforcement and individualized accomplishments. Each student has their respective inclination for pursuing music and the resulting success will look different. Through his own instruction, he has learned everyone learns different and has various motivating factors. His goal is to inspire and let students feel at home through the process while obtaining long term goals without feeling overwhelmed.