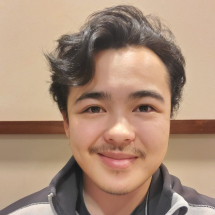 Zico Hernandez has always had a passion for music. He grew up in Fort Lauderdale, Florida and began playing drums at 6 years old and piano/guitar at 13. Throughout primary school he'd spend much of his time playing piano and drums at church and with blues artists at his father's gigs. During his High school career he explored latin music under the wing of Raul Hernandez, and played with a Santana tribute band, whilst learning guitar and singing on his own time.

He moved to Seattle in 2017 looking to expand his repertoire and love for music. In this time he took music theory classes at Highline Community College; played guitar for a grunge band named Wonderland and studied with Adrian Young, perfecting his rudiment and wrist work with drums. He is well known in the Seattle area for his versatile playing and ability to add an experienced dynamic pulled from the various genres he explored. Zico has played drums with Sorry Dad a queer activist band in Seattle, and also guitar and piano with Thrunk! a modern classic rock experimental band.

Zico is now working as a Percussion/Guitar/Piano instructor, while currently working on a album. He believes that music is the embodiment of love and freedom, and hopes that one day he can be a true rockstar.