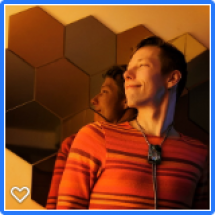 Woody is a Seattle native that started playing and performing with bands on bass and guitar when he was 16, and he never looked back! He has played extensively with funk, blues, rock, punk, folk, flamenco, gypsy jazz and prog rock styles, and dabbled in many others. He loves to improvise, but also knows a great many songs, and has been referred to as “The Human Jukebox” by some of his peers.

In the Seattle music scene, Woody has organized meetups of many kinds and the small music festival “Chaistock” for over a decade. Now, he is playing in local groups Map of the Woulds and Morning Glory Revival while developing his home studio and learning how to be a recording engineer on the side.

In addition to music, Woody’s twin passion is for teaching. He has worked in education for the past 8 years, and last year obtained his Master’s in Teaching degree in Elementary Education through Western Governors University. He has worked with a diverse range of students from preschool through college. He loves working with children especially, and sharing in the path of discovery with them.
It’s even better when that experience is centered around something so wonderful as music!

Woody’s main goal is for his students to develop love for a wide range of music, and become confident enough in their musical abilities to at least entertain themselves when no one else is around. He hopes to promote in his students a lifelong love of learning, and an endless curiosity for great new music.