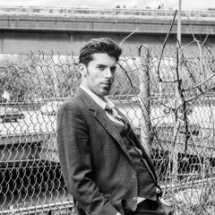 Wes Speight, a Seattle singer/songwriter originally from Tennessee, has played many of the venues in Seattle WA and Nashville TN and has toured to places such as Vancouver BC, Oregon, California, Arizona, New Mexico, Louisville KY, Manchester TN and Manhattan NY. His music varies widely from bluesy to tribal to acoustic rock.

Speight's music career began in his teens, dabbling at piano and drums. He bought his first guitar at 19 and "started writing bad songs right away." He has since become a bit of a musical virtuoso, adding harmonica, bass, synthesizer / keyboard, mandolin, and percussion to his list. He is also a creative film maker who aspires to compose the musical score for a film someday. Music, says Speight, "is my reason."

Speight's first album, Please EP, was released in 2008 under an independent label. Since then he has released 4 more full length albums independently: 2011's Lie & Wish, 2012's Hackneyed and 2014's Transmigration. A critically acclaimed and fast-rising talent, he will be touring in the U.S. and internationally.