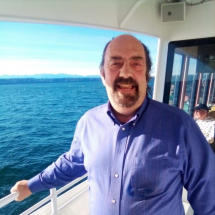 Warren Murray is a multi-instrumentalist who first studied music starting at age 12 by taking private guitar lessons. By middle school, Warren formed a rock band with other players and began studying with many well known teachers including Tracy Moore and instruction with Roger Fishers, the guitarist and founder of rock band 'Heart'. Warren has also studied with Leroy Johnson, a highly respected Jazz & Blues guitarist and studied classical guitar with International Music professor Yasuko Endo from Japan.

Warren received his Bachelor of Arts in Music Education from Seattle Pacific. While in college, he played in festivals, concerts and showcases. Warren reads both standard music notation and tablature, and plays in many styles including blues, rock, slide guitar, classical guitar. After college, Warren continued teaching his own students and began working with all skill levels including beginning levels, intermediate and more advanced.

Warren also teaches piano and keyboard! He makes piano fun by having students request their favorite songs from movies or YouTube while learning to read piano music from lesson books. His overall goal is to develop well-rounded musicians and give them confidence while enjoying playing. He can show you how to play many styles including pop, rock or blues!

Being a multi-instrumentalist, Warren also plays and teaches bass guitar and blues harmonica. He will tell you that he is "way" into the "blues" and pays tribute to legendary players of blues harp and guitar. He has taught several students who have gone on to be professional musicians in these genres.

Warren believes music education is important because it builds confidence in the youth. He also notes that studies have shown that students who learn music achieve better overall grades. Students should expect to be given engaging musical material that will require steady practice. You will have clearly defined and understandable weekly assignments to complete before the next lesson, along with his positive attitude guiding you along the way!