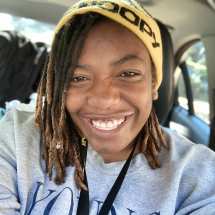 Victoria, known by her students as "VickyD," first fell in love with music from the sound of Alicia Keys at age of 5 after hearing Alicia's popular song "Falling." Victoria's passion for playing piano began a few years later in music class at school. A whole new world of expression opened up for her as she began to learn how to play keys, read sheet music, and compose. Shortly after, Victoria fell in love with the guitar and she quickly discovered she was naturally artistic and able to internalize music differently than her peers. From there, she began to work on her rhythm and keeping a steady beat in her artistry, eventually getting into percussion work on hand drums such as the Djembe, Cajon, and Bongos, which ultimately helped broaden her overall musicality.

Along with instrumental artistry, Victoria is also a songwriter and spoken word artist. Much of her creations are inspired by her faith journey and testimony which is expressed in her pieces. She began incorporating her musical abilities in the production of her songs and poems at the age of fourteen. As she got older, Victoria had opportunities to perform first at family reunions, then at school after school functions, and now more often at churches and worship nights.

Today, Victoria continues to incorporate her musical abilities and drive to grow as a musician into her teaching. To Victoria, music is more of a lifestyle and passion to than just a skill. She looks to spark this same level of musical intrigue in all of her students, bringing a fun, upbeat, and engaging teaching style in to every lesson.