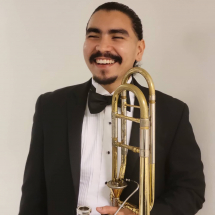 Victor Charriez is a passionate music maker and teacher. He plays many different styles, including classical music, jazz and salsa. He treats all of his students in a very personal manner, giving them the tools that they need to succeed in music making. The belief that all students have unique needs is in the core of his teaching methods.

Victor was born and raised in Puerto Rico, where Victor’s musical upbringing took place. He began his music studies at Escuela Libre de Música de San Juan, which lead him to pursue his Bachelor of Music Performance at the Conservatory of Puerto Rico. He holds a Masters of Arts in Music from the University of Central Florida.  He has performed in New York, California, Massachusetts, Georgia, and Florida. He has traveled and performed internationally in Italy, Spain, France, Panama, Costa Rica, Colombia, and Cuba, making music with his trombone and his voice in a choir.