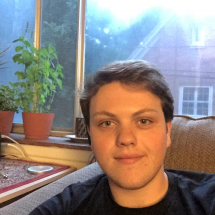 Born and raised in Northern Virginia, Thomas has fostered a lifelong passion for music through his devotion to the study of piano and vocal performance. Beginning at the early age of 5, his two decades of experience have expanded to include an eclectic range of disciplines including composition, music theory, and most importantly, pedagogy.

As a decorated pianist and chorister, Thomas spent his earlier education performing both as a soloist and accompanist for orchestral and vocal performers in a professional setting. Furthermore, he has collaborated with groups such as the ACDA and VMEA, with whom he has performed in statewide, nationwide, and even international choirs including an American Youth Ensemble directed by British a cappella legend Simon Carrington that toured the UK in 2012. Also during his high school years, Thomas attended the prestigious Virginia Governor’s school, where he furthered his vocal technique and had the opportunity to study pedagogic theory and music therapy with professors at Radford University, whose college of music helped pioneer the latter field of study.

Bolstered by his successes with these ensembles and as a operatic soloist, Thomas went on to receive a scholarship from Northwestern University’s Bienen School of Music, where he studied Vocal Performance under the instruction of Professor Kurt D. Hansen.