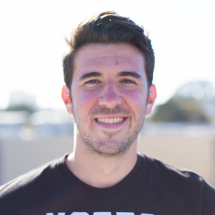 When T.J. was in high school, basketball was all he cared about. Though he was never an elite athlete, he dedicated almost all of his free time to study of the game. When he was injured and unable to play his sophomore year, he decided to try guitar.

Playing music gave him a thrill and sense of purpose that he had never known before. He went on to play and perform throughout high school and earned a large scholarship to study music in college. After graduating with a Bachelor of Arts in Music, he decided to do some real world learning. A few months after graduation, he moved to Nashville.

In Nashville, T.J. worked as a session guitarist and freelance audio engineer. In this context, he was able to learn and perfect entire genres that he had not spent any time in before. After a few years of pure hustle as a musician in Nashville, he decided to return home to California to persue a career in music education.

Now living in Denver, T.J. works in music education full time and does session guitar work on the side. Also involved in several local bands, he is excited to take in all that the Denver music scene has to offer. While he does love performing and writing, teaching remains a real passion and he is excited to continue exercising it.