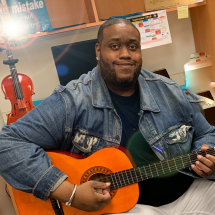 Integrity, passion and professionalism are what Tannon Gilmore has built his musical life from. Tannon started his career at the tender age of 6 years old after receiving a guitar for Christmas. At an early age, he began to teach himself how to play guitar until his parents noticed, and thought, "we must find him an instructor"! It wasn't long before Tannon auditioned to attend one of Houston's best schools for Performing and Visual arts then known as Johnston Middle School, now known as Meyerland Performing and Visual Arts. Tannon achieved high honors and expanded his overall love for music into learning to play the saxophone and guitar simultaneously.. He quickly picked up the saxophone, and was put in the highest band where he sat 1st chair for two years.

The late great Mr. Erwin Portis would make an impact on Tannon's life that would continue on into his professional career. Portis would challenge Tannon to be a "master of many". During high school, he played bass guitar, lead guitar, and drums all on the same record. He also picked up several low brass instruments, including tuba, baritone, and sousaphone, while also learning how to write and score music.

Tannon attended Texas Southern University with a full scholarship to be in the "Ocean of Soul" Marching Band, and in their world famous TSU Jazz All-Star Band. During his time at TSU, he served as Kappa Kappa Psi's (National Honorary Band Fraternity) president for two years, was a sousaphone section leader, he won several awards at jazz competitions on guitar and saxophone, and he did his first tour with Grammy winning recording artist, Usher.

Now settled back in Houston, he is the lead guitar player for Nicole C. Mullen and is still heavily called on to record guitar and other instruments for records every year. He is now the violin instructor at Bruce Elementary Magnet School and has his own program that teaches young kids the importance of theory and being a professional musician. He looks forward to sharing his passion for music with his students!