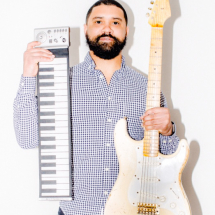 "I would rather write 10,000 notes than a single letter of the alphabet" -- Ludwig Van Beethoven.

Steven Boone has spent his life being a student and teacher of music. Even though he has reached a high level of success in his craft, he still considers himself -- and all musicians at different phases of their journey -- students of music and life. Over time, study evolves, and the student grows older, but learning never stops!

Steven began his musical journey at the age of 7 taking private piano lessons. In his early teens he was introduced to the guitar where his love for music and music education came full circle. In high school he took AP music theory and was the first chair guitarist in his high school jazz band. Though he was accepted to Berklee College of Music and Belmont university he ended up attending VCU (Virginia Commonwealth University). While at VCU, Steven took private jazz guitar lessons under Mike Ess. During his college years he formed two successful bands (Bella Blue, and Steve Carter Connexion) and also joined the popular hip hop group Earthtone in the Richmond, Virginia area. All of these groups were comprised of other outstanding musicians that have gone on to pursue professional careers in music as well.

After graduating VCU Steven continued his path in music by teaching private lessons, playing guitar in church, and being a member and session player for multiple funk/rock/and R&B groups in the DMV area. Steven has taught private guitar and piano lessons in the DMV and Richmond areas since graduating VCU -- working with students as young as 5 and as old as 50. He currently is the lead guitarist and vocalist for the band Stonebrook which is signed with EastCoast Entertainment, and Dance Candy which is signed with Sam Hill Entertainment. Dance Candy has been the rhythm section for the living legend of tap dance Savion Glover since 2015. They have performed everywhere from New York City to Mexico City and countless theaters in between. In 2017 Steven released his debut solo album entitled "Soullow" which can be found on iTunes, Spotify, and Tidal.

For Steven, becoming a music instructor has been a pivotal part of his musical journey. Working in music education is another side of his passion for the arts, and he feels that passing on the tradition of learning an instrument is one of the greatest gifts he can give. Steven puts a lot of care and attention into each of his students as individuals, their interests, and delivering a well-rounded curriculum, so they can enjoy their instrument throughout life. He is excited to work with each and every student under his care, and he knows that being a part of music education today will form the soundtrack of the future!