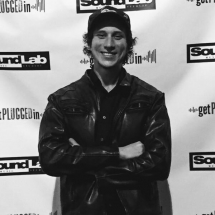 Stephen is professional guitarist based out of Duluth, Georgia. He began playing music at the age of five; his parents had put both him and his brother in piano lessons when they were very young. At the age of twelve he was given his first guitar. After a few lessons he began teaching himself his favorite heavy metal songs by ear, and within a year's time he was playing and writing songs in rock bands with other students from school.

He continued playing throughout high school and after graduating, Stephen began attending the Atlanta Institute of Music in Duluth. It was here that he broadened his musical horizons under the mentorship of guitarists such as Bill Hart, Carl Culpepper, Trey Wright, Nite Driscoll, and pianist Randy Hoexter.

After graduating from AIM with honors, Stephen began teaching at the Rock n' Blues Academy in St. Petersburg, Florida. After a few months, he returned to Atlanta and shifted his focus onto live performance, playing with several groups of different styles from country to heavy metal to reggae and everything in between. He has performed at several notable venues such as: The Masquerade, Wild Bill's, Atlanta Motor Speedway, and The Georgia International Convention Center.