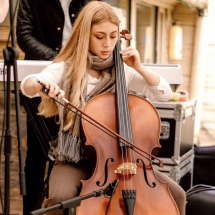 Silvana Mantilla is a professional songwriter, artist and music producer that has dedicated her life to music and the arts, she grew up with strong family influences towards music and from a young age she began to study cello and piano and she received her bachelor’s degree as a Music Producer in Colombia, and went to San Diego California to complete her studies in arts. As an artist her music is characterized by a diverse sound mainly influenced by her cellist years, as well as by other instruments such as the piano, ukulele and guitar.

Her great passion is teaching vocal technique, among others such as cello, ukulele and piano. She believes that music is the language of the soul and is the best form of expression that human beings have to communicate from within and also to grow in knowledge and intellect. Seeing people become passionate learners brought her much joy.

In 2020 she debuted with her first Spanish single ‘Amarte Fue Fácil’, which marks the beginning of her solo career which has been strongly influenced by music experimentation, taking elements from pop and urban beats mixing it with some latin and alternative sounds.