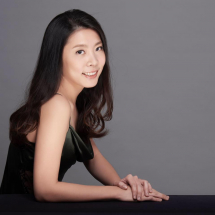 Dr. Shih-Ting Wu is an accomplished pianist, performer, educator, and musical artist who is initially from Taiwan.

Dr. Wu possesses an extensive education in the realm of music, recently earning her Doctor of Musical Arts degree in Piano Performance from University of Texas at Austin in the Spring of 2018 under Professor Gregory Allen's studio. She also obtained her Master of Music and Bachelor of Music, both in Piano Performance, from The Boston Conservatory and National Taiwan University of Arts (NTUA) in 2015 and 2012 respectively, where she studied with Dr. Jonathan Bass and Dr. Chi-Yin Lin.

Moreover, Dr. Wu is a seasoned performer and a veteran of the concert stage. She has performed as a soloist but has also collaborated with various instrumentalists in a variety of different settings. She attended the Mozarteum Internationale Sommerakademie in Salzburg in 2013 and 2014, where she studied in Professor Ya-Fei Chuang's studio. Also in 2014, she participated in the Duxbury Music Festival and studied Chamber Music with Mr. Jeffrey Cohen and Mr. Amir Elden, as well as Solo Piano with Dr. Jonathan Bass. In February 2014, she participated in the New Music Festival, where she had the opportunity to work with talented composer Louis Andriessen, performing his piece "Joli Commentaire." In November of 2014, she performed two of Ligeti's Piano Etudes ("Fanfares" and "Arc En Ciel") again at the New Music Festival. Also, she has had the honor of working closely with Boris Berman, Brian Ganz, Eugene Pridonoff, Graham Scott, Jung-Ja Kim, Kirill Gerstein, and Victor Rosenbaum.

Dr. Wu has held over ten piano solo recitals and performed in multitude cities, including but not limited to Kaohsiung, Taipei, Austin, Boston, New York, and Salzburg. From 2016 onward, she began focusing on collaborating with an array of instruments and groups. She also started studying with Dr. Colette Valentine and Dr. Anton Nel. As of lately, she has performed at multiple concerts, including a duet with cello in May of 2018, a duet with bassoon in October and November of 2017, and a trio in April of 2017. Furthermore, she is an energetic, inspirational accompanist, and has been meticulously working in Dr. James Morrow's studio at the personal University of Texas at Austin, performing for lessons, seminars, university choirs, and Bach cantata projects.

Presently, Dr. Shih-Ting Wu provides instruction studio and educates students utilizing her unique strategies and methods she has refined throughout her musical career. Ultimately, she strives to continue performing, teaching and enriching people's lives through her heartfelt music.