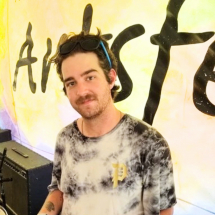 Sean Sidley is a drum instructor and performer in the Washington, D. C. area. Engaging and filled with a zest for life, he believes lessons should be as fun as they are informative.

The son of two prominent D. C. musicians, Sean began playing drums at 18 months old. He began performing on the drum kit at age four, and played his first paid professional gig at the age of seven with his family’s band.

In elementary school, Sean began taking lessons and studying with known D. C. session drummer, Andy Hamburger, and focused on fundamentals and learning to read music. Continuing his study into his teens, Sean formed many local school bands while away at boarding school. After high school, he started working and playing gigs to support himself through school. It was during this time that Sean began taking lessons with world famous Afrobeat drummer Tosin Aribisala, where he also learned Afrobeat, Funk, Jazz, Latin, Afro-Cuban, and Gospel. A gifted musician, Sean possesses the ability to play an endless variety of music from Pop, Fusion and Jazz, to Hard Rock and Latin styles. Sean now tours with a variety of artists based all over the Northeast region.

Sean began teaching at 18 years old and has helped countless students of all ages achieve their goals. His lessons focus on creativity and musicality, both of which are keys for becoming a successful musician. Sean is proficient with and loves to teach all styles of music, encouraging his students to explore and experience a wide variety on the path to becoming more versatile.

Above all, Sean aims to instill confidence, dedication, and a passion for music (and life) in each of his students. Believing that music is a life force, he hopes that his students will carry music in their hearts wherever their journey may lead them.