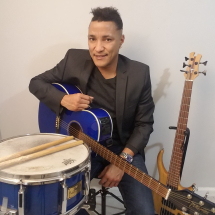 Sean “The Rick” Rickman is a native of Washington, D.C. with over 25 years experience as a music teacher. He teaches drums, guitar and bass throughout the D.C. area and also internationally.

Sean’s musical ability developed from exposure to all styles of contemporary music. Sean’s mother was a lead singer cast as Mary Magdalene in “Jesus Christ Superstar,” and his father, guitarist Phil Upchurch, has been featured on recordings by Quincy Jones, Curtis Mayfield, Etta James, and many others. Following the musical path laid before him was a natural progression for Sean.

Sean’s teaching career first started as he mentored peers to engage fully with the traditions, cultures, and wide range of musical styles explored by those he admired. This quickly developed into formal teaching and private instruction from an early age. Being from a musical family, he understands the time and patience it takes students to progress through every level of musical development and encourages his students through the process.

Sean began teaching privately in the Washington DC area in the early 90’s and has been an educator since. He has been a guest Resident Artist and instructor at Stanford University, Oberlin Conservatory, The New School NYU, UC Berkeley, Berklee College of Music, and UCLA to name a few. In addition, Sean has also taught youth summer programs and master classes throughout his career.

A note from the teacher:
“I enjoy teaching drums, guitar and bass because these are the rhythm section instruments in all the music I listened to and enjoyed as a kid growing up. These three instruments have their own voices and are essential to all popular music of the 20th Century. I was exposed to rock, funk, jazz, gospel, disco, heavy metal, electronic, samba, calypso, reggae, salsa, Indian and African music to such a degree I had to be the musician I am today. Exposing, teaching and encouraging students to do the same is such an exciting thing to be a part of and witness.”


Music Teachers who come to your home or school!