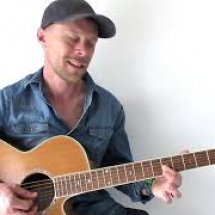 Scott grew up in Omaha, Nebraska. Early musical memories include singing and listening to his Grandma play the organ, including traditional Czech songs. After his oldest sister stopped playing the flute, Scott picked it up for several years in elementary school. Soon after that, he picked up the saxophone for several more years, but eventually landed on the guitar as a lifelong pursuit of expression and learning. So, the nineties were in full swing, and some of Scott's favorite Guitar sounds were coming from the Seattle Rock scene, and also blossoming Jam bands like Dave Matthews, Phish, and Blues Traveler, and the distorted guitar sounds of bands like Bush and Green Day.

Later, Scott fell in love with authentic American music, like jazz, blues, funk, Soul and R&B. Scott's passion for creating led him to the exciting world of musical improvisation. Once he found blues and jazz music, a whole new world opened up. Now, he is trying to master and combine these genres into a funky rock sound.

For most of his life, Scott pursued a career in the culinary arts, and received his Associated degree from Texas Culinary Academy. He even succeeded in owning and operating a successful food truck here in Denver. During this time though, Scott knew his true passion was for music! So, while working hard to move forward in his career, Scott practiced and studied endlessly to learn everything about his favorite bands, musicians, and music. After finding a renewed passion to learn new aspects of the music world, Scott has been on an adventure of live street performing, writing music and lyrics, building a setlist to start getting live gigs, and joining bands. Currently, Scott is in one band, and has one project on the side getting off the ground.

If he does have free time, Scott is usually creating guitar lessons and content for his youtube channel, hiking, biking, camping, gem hunting, and practicing other instruments like piano and clarinet.

There is a certain timeless feeling that creating and playing music evokes, some call it being in the zone. Scott strives to share that with his students. Having the ability to pick up an instrument, and just let the music flow from it, is so special, and a wonderful form of self expression.

Music is fun, so lessons should be, too. Scott wants to help his students create a life-long bond not just with guitar, but with music in general.