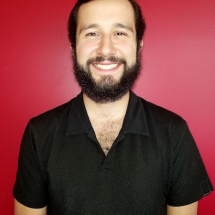 Scott D'Angelo is a musician who has resided in Washington since 2016. Originally from Atlanta, GA; Scott began taking piano lessons at the age of 7. He attended Woodward Academy and took part in the school's concert band between the ages of 12 to 15 where he played trumpet, baritone, and tuba. Scott also began playing bass guitar in the school's jazz band when he was 14 as well. At the age of 17, Scott decided to focus his musical studies on the bass guitar and has continued to further his music education. Scott attended college at Auburn University. He graduated Cum Laude with a Bachelor's Degree in Political Science, and continued to play at local venues during that time.

After graduating from Auburn University, Scott decided to advance his musical skill level further by enrolling in the Atlanta Institute of Music and Media. Scott studied Jazz with Gary Wilkins and Rock with Anthony East while in school at AIMM and took a particular interest in playing jazz standards and fusion. Some of Scott's biggest musical influences include Antonio Carlos-Jobim, Stevie Wonder, James Jamerson, Chick Corea, and contemporary artists like Joe Dart of Vulfpeck. Scott also took a particular interest in Music Theory Education while at AIMM under the direction of Steven Yelich. Scott graduated with a 4.0 GPA in the Honor's Bass Certificate Program at the Atlanta Institute of Music and Media in September 2016.

Scott has developed his musicianship to enable himself to play multiple instruments and currently offers lessons for Bass Guitar, Guitar, and Piano. While in Atlanta, Scott previously played for the bands Five40 and The Lloyd Warren Trio, which were based out of Atlanta, GA. He has also played notable venues such as The Masquerade (Atlanta, GA), The House of Blues (Myrtle Beach, SC), and The Neighborhood Theatre (Charlotte, NC). Scott currently plays bass with local Seattle artists Spence Hood, Lucas Tayne, Sarah O'Dea, and Mark Brainard. Scott has also played local venues such as the Columbia City Theatre and the 48th Annual Seattle Folk Life Festival.

Scott is the director of Seattle's Lessons In Your Home School. His musical experience combined with his energetic attitude make him a great fit for any student looking to learn the exciting worlds of bass, guitar, or piano.