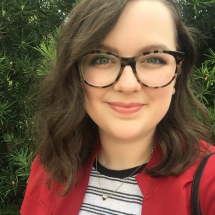 Savannah Sheppard is a sophomore pursuing a Vocal Performance degree in music at Houston Baptist University. Her passion for music started at age 4, where she later began singing in church choirs around the Houston area. Savannah began classical vocal training at Atascocita High School, competing in UIL, Solo and Ensemble, and All-State competitions all four years. In addition to joining the school's acapella choir, Savannah also performed with the Forte! show choir and Madrigals caroling group. Savannah also traveled to Arkansas to perform in the Southwest American Choral Director's Association Convention (SWACDA) in 2014. In 2016, Savannah competed and sang in the All-State Women's chorus at the TMEA convention .

Beginning her career at Houston Baptist University, Savannah has had the privilege of performing with the Houston Civic Symphony, touring with her choir through Texas, and competing in NATS competitions. Savannah has made semifinals 2017 and 2018 in the Greater Houston Area NATS competition. She hopes to continue performing with many other choirs and orchestras in the future.

Now fulfilling her passion by studying music at HBU, Savannah has discovered her love of teaching others. She believes that everyone shares a connection through music, and by continuing to learn we can bless others with our talents. Savannah hopes that she can inspire her students to do their best and always have music in their lives.