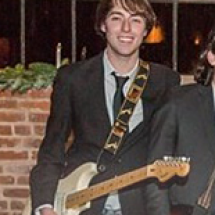 Sam Matheson is a guitarist based out of the DC metro area. He teaches all ages of students, from beginner to advanced, and he specializes in teaching rock, pop, country, folk and jazz.

Sam began performing at the age of 16 with friends from school in the band "Freakandy". In this group, he started his journey by playing at local venues such as Jammin' Java and the Velvet Lounge. This interest quickly grew into a career path, and Sam decided to pursue his degree in music. After graduation Sam attended Berklee College of Music studying theory and playing techniques with guitarists Tomo Fujita, Jeffery Lockhart and John Wilkins. While at Berklee Sam had an opportunity to focus in on developing his craft as a guitarist and played with the bands "Cherry Mellow" and "Whatever Whatever". Both provided opportunities to record, tour, and play stand out events within Sam's career. After relocating back to the D.C. area after Berklee, Sam also began playing with a DC area band, "Turtle Recall". Their stand out events and performances include Shamrockfest DC, The Hamilton, The 9:30 Club, and more!

Sam's playing style is influenced by a variety of guitarists including Jimmy Page, John Frusciante, Elliot Smith, John Scofield, and Nile Rodgers. He's also a dedicated instructor to his students and enjoys working with all age groups -- from young beginners through adults! His lessons are based around building melodic and rhythmic fundamentals, as well as including songs the student is interested in. Finding your own "voice" with the guitar is a goal Sam reinforces with his students, and he loves seeing the joy they have when learning to play a favorite song. In addition to repertoire and song selections, Sam believes in including music theory and notation along with the practical areas of study. This leads to understanding the language of music along the way for a well-rounded course of study.

In addition to teaching, Sam is still a very active performer in the D.C. area with his band "Turtle Recall". He looks forward to creating new music of his own and with his students each week!