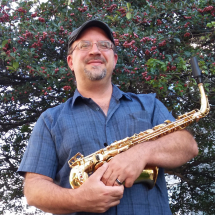 Music makes the world go around, and for Santa Fe Sam the saxophone man, it has led him around the world. A professional player since his teens, Sam has played in many different types of bands throughout his life. From big band jazz to reggae, rock and hip hop, he has entertained audiences around the world and recorded tracks on many different instruments. Feeling the rush brought on by a live audience, performing for people has been the highlight of his life. Having worked in many of the best music stores in the country, he has gained an appreciation for customer service and musical education.

Teaching someone an instrument, and helping them get to a point were they can begin their own musical journey has brought fresh joy to his heart. Realizing now, more than ever, that anyone can benefit from the gift of music, he hopes to teach students the foundations that made his career possible, as well as a way to turn off the traditional learning and explore the bounds of intuitive creativity.