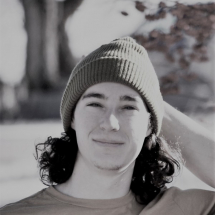 Sage Vickers is a drum set player and percussionist. Born in Grand Junction, CO Some of his earliest memories are waking up to his Father playing classical guitar, and playing around on the family piano. He started in piano lessons at a very young age, but at nine years old he played drums for the first time and never looked back. He went on to play in ensembles at school and in the community, eventually playing in the Western Slope Honor Jazz Band for all four years of high school, and participating in audition ensembles at Colorado Mesa University in concert percussion and jazz drum set. He went on to study at Adams State University for two semesters under percussionist James Doyle where he developed a love for hand drumming and world percussion.

Following his passion for drumming and education, Sage began to gig with local acts and teach privately as well as in school district ensembles. Having studied his craft for thirteen years, he found he had a lot to offer his students and found teaching to be incredibly fulfilling. This experience inspired him to move to Atlanta to attend the Atlanta Institute of Music and Media, where he currently studies, to further develop his musicianship. Sage believes in everyone's creative potential and ability to express themselves through music. He believes music inspires greatness and happiness within people and looks forward to every opportunity to share that with students.